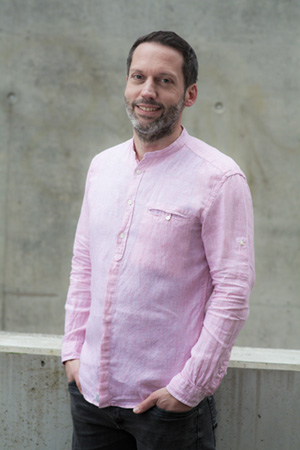 Founder of mp-film. Markus graduaded in 2002 in biology at the University of Bayreuth. His career path then took him to the renowned Filmakademie Baden-Württemberg, where he studied business and science film. After another diploma, he began working as an editor and director for the Lead Agency of the European Commission, Media Consulta, in Berlin. He supervised film projects across Europe which focused on research and science, as well as agriculture. Following this, he expanded the spectrum of his topics in the field of innovative technologies as an independent specialist director. He has delivered projects for Carl Zeiss, BBraun, Fraunhofer, Bosch, State Museum of Natural History Karlsruhe, SMA, Norma Group, RAG, Mercedes Benz, Audi and several federal and EU ministries. Since founding mp-film in 2008, Markus has established a network of experienced and talented creatives with a broad base, who at the same time possess a high degree of specialized knowledge. The aim of this network is to provide customers from a wide variety of specialized areas with optimal project support.

THIS IS THE MOMENT – IMAGEFILM
CARL ZEISS AG